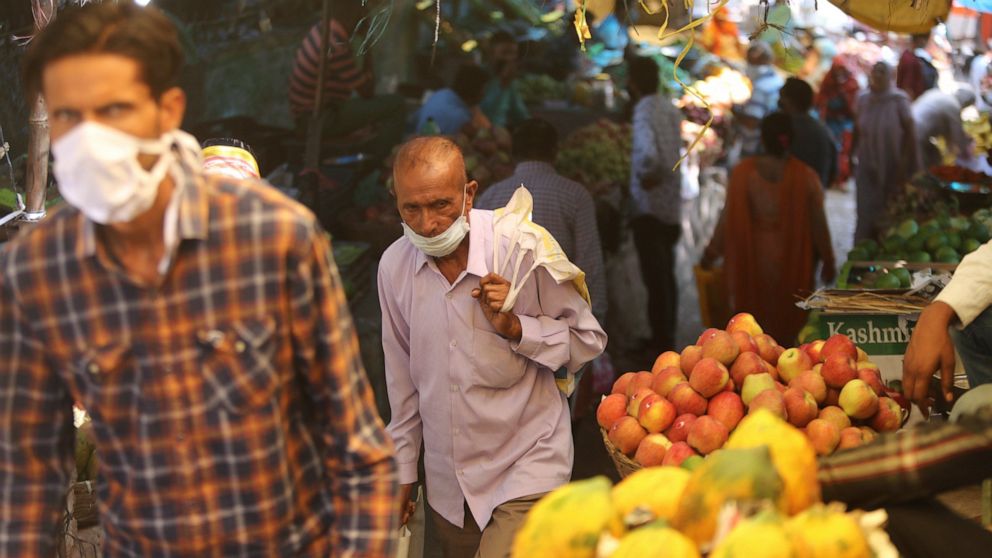 India’s confirmed coronavirus cases are nearing 7 million with another 73,272 reported in the past 24 hours

NEW DELHI — India’s confirmed coronavirus cases are nearing 7 million with another 73,272 reported in the past 24 hours.

The Health Ministry on Saturday also reported 926 additional deaths, taking total fatalities to 107,416. The deaths remained below 1,000 for the seventh straight day.

India is seeing a slower pace of coronavirus spread since mid-September, when the daily infections touched a record of 97,894 cases. It’s averaging more than 70,000 cases daily so far this month, while the recovery rate has exceeded 85%.

But health experts have warned that congregations during major festivals later this month and in November have the potential for the virus to spread.

“We have to work aggressively to make sure that during winter months and during the festive season coronavirus cases don’t rise dramatically,” said Dr. Randeep Guleria, a government health expert.

Experts say India’s fragile health system has been bolstered in recent months but could still be overwhelmed by an exponential rise in cases.

Consumer activity is gradually rebounding and millions of factory workers who had fled cities when India imposed a 2-month-long rigorous lockdown on March 25 are returning.

In other developments in the Asia-Pacific region:

— The daily number of reported new coronavirus cases in Myanamar has exceeded 2,000 for the first time, as the Southeast Asian nation struggles to control the spread of the disease. The 2,158 cases announced Saturday brings the total to 26,064 since March. The total includes 598 deaths, 32 of which were announced Saturday. Myanmar had recorded just 353 virus cases at the beginning of August, but an upsurge later that month in the western state of Rakhine quickly spread to other parts of the country. Myanmar’s leader, State Counsellor Aung San Suu Kyi, said in a Friday night televised address that the number of people who get infected from people who don’t show any symptoms of the disease is now increasing. Suu Kyi noted that one of the drugs Myanmar is using to treat patients is Remdesivir, which was also part of U.S. President Donald Trump’s treatment.