The clashes on Thursday afternoon and evening began in Times Square and spread to the Diamond District, a small neighbourhood south of Rockefeller Center that is home to many Jewish-owned businesses, as Israel and Hamas agreed to a cease-fire after days of fighting that killed more than 230 people in Gaza and 12 in Israel.

By midday Friday, 27 people in the city had been arrested on charges including disorderly conduct and unlawful assembly, the police said. 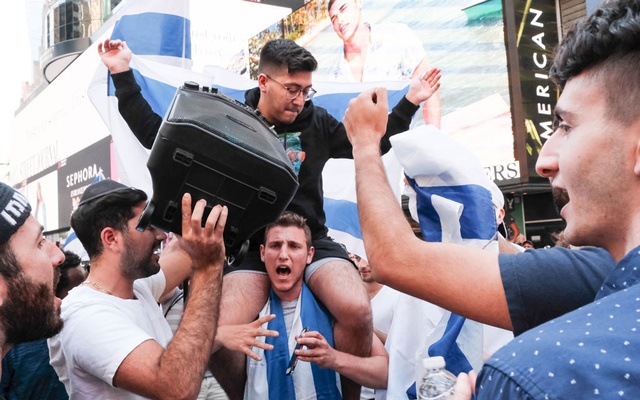 Pro-Israeli demonstrators in Times Square in New York, May 20, 2021. At least 27 people were arrested after demonstrations in Times Square and the Diamond District in Midtown Manhattan. Several lawmakers have denounced the clashes. (John Wha/The New York Times)

Videos taken from the scene and shared on social media showed fights breaking out among small groups, with people throwing punches and burning flags as jeers were exchanged. It was unclear what incited many of the individual clashes or who had started them.

One video showed groups of young men, many of whom waved Palestinian flags or wore traditional Palestinian scarves, moving through Midtown pushing and shouting obscenities at older men they accused of being Zionists. At one point, a firework was thrown at close range at a group of pedestrians, including protesters, the police said, adding that it was unclear who threw it.

Another video showed a man being beaten by several others while he lay in the street. A Brooklyn man, Waseem Awawdeh, 23, was charged with several counts on Friday afternoon in connection with the beating, including assault as a hate crime, aggravated harassment as a hate crime and criminal possession of a weapon. It was not immediately clear if Awawdeh had retained a lawyer.

The police said they were still searching for five to six other people in connection with the assault. The victim, Joseph Borgen, 29, was punched, kicked, pepper sprayed and hit with crutches. He was taken to Bellevue Hospital, the police said. 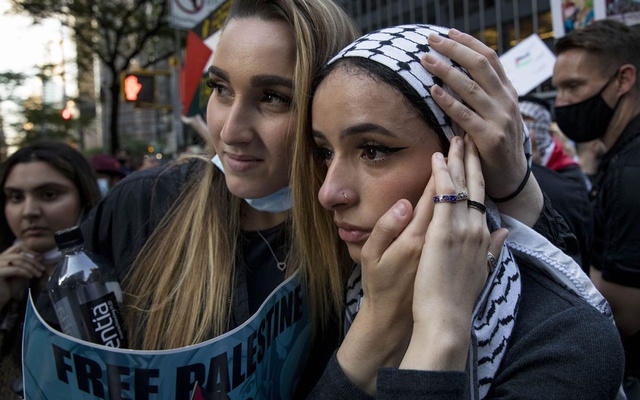 Pro-Palestinian protesters await news of a friend who was arrested while protesting earlier this week in New York, May 18, 2021. At least 27 people were arrested after demonstrations in Times Square and the Diamond District in Midtown Manhattan. Several lawmakers have denounced the clashes. (Dave Sanders/The New York Times)

“I was really just cowering and made sure I braced for it and survived,” Borgen, who said he was Jewish, told FOX 5 New York on Friday. “My message would just be everyone get along. We all want peace.”

Mayor Bill de Blasio condemned the attack on Friday morning. “Anti-Semitism has NO place in our city,” he said on Twitter. “There’s no excuse for violence against someone because of who they are. None. We will bring the perpetrators of this vicious act of hate to justice.”

The renewed fighting between Israel and Hamas set off a wave of protests and political tension in New York and across the nation, with many rallies focused on Israel’s treatment of Palestinian people and what some demonstrators said they felt was an insufficient response to the conflict from the United States.

Multiple events in New York, including one outside the Israeli Consulate near the United Nations and another in the Bay Ridge neighbourhood of Brooklyn, drew several thousand protesters, who were joined by elected officials like Zohran Mamdani, a Democrat in the state Assembly.

Read More:  HOW A REMEDIAL MASSAGE CAN HELP YOU TO QUICKLY OVERCOME DISCOMFORT AFTER EXERCISE

Several candidates in the city’s mayoral race also weighed in on the conflict, with the initial positions of some sparking frustration and backlash on social media.

The protests remained overwhelmingly peaceful and organisers said they believed some were among the largest demonstrations in support of Palestinian people in New York in recent memory.

But news of the cease-fire on Thursday came as the mood among some groups in New York grew increasingly tense. The evening would stand out for the starkly different tone, as clashes broke out between groups of pro-Israel and pro-Palestinian demonstrators. 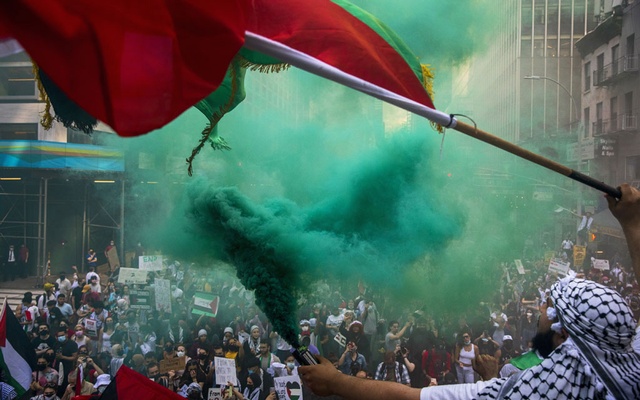 Pro-Palestinian protesters in Manhattan, May 18, 2021. At least 27 people were arrested after demonstrations in Times Square and the Diamond District in Midtown Manhattan. Several lawmakers have denounced the clashes. (Dave Sanders/The New York Times)

A firework exploded at street level near 47th Street and 7th Avenue, leaving an older man collapsed on the sidewalk, a video showed. A 55-year-old woman suffered minor burns to her back as a result, the police said.

Many details around the incident remained unclear on Friday, and the police said they were unsure who had thrown the firework. The woman who was injured was taken to the hospital in stable condition.

Still, several local elected officials voiced concerns on Friday over the skirmishes and the perception of anti-Semitic bias in several of them.

“This is outrageous and unacceptable,” Councilman Mark Levine, who represents portions of upper Manhattan, said on Twitter. “We cannot allow this in our city.”