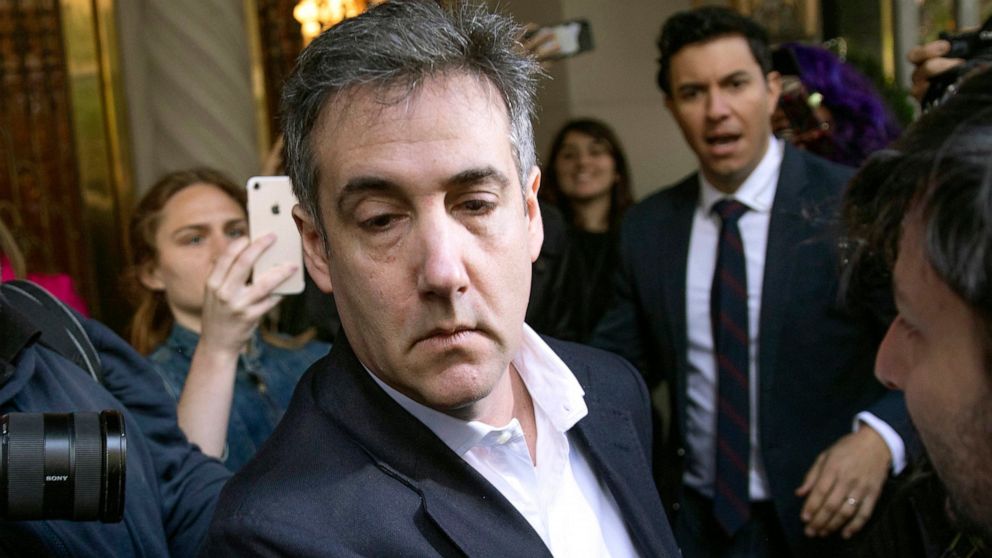 NEW YORK — President Donald Trump’s former personal lawyer and fixer, Michael Cohen, was returned to federal prison Thursday, after balking at certain conditions of the home confinement he was granted because of the coronavirus pandemic.

Records obtained by The Associated Press said Cohen was ordered into custody after he “failed to agree to the terms of Federal Location Monitoring in Manhattan.”

But Cohen’s attorneys disputed that, saying Cohen took issue with a condition of his home confinement that forbid him from speaking with the media and publishing a tell-all book he began working on in federal prison. The rules also prohibited him from “posting on social media,” the records show.

“The purpose is to avoid glamorizing or bringing publicity to your status as a sentenced inmate serving a custodial term in the community,” the document says.

Cohen has written a tell-all book that he had been preparing to publish about his time working for the Trump Organization, his lawyers said.

“Cohen was sure this was written just for him,” his attorney, Jeffrey Levine, said of the home confinement conditions. “I’ve never seen anything like this.”

A Justice Department official pushed back on that characterization and said Cohen had refused to accept the terms of home confinement, specifically that he submit to wearing an ankle monitor. The official could not discuss the matter publicly and spoke to AP on condition of anonymity.

Cohen legal adviser Lanny Davis called that “completely false,” adding that “at no time did Michael ever object to the ankle bracelet.”

Cohen later agreed to accept all of the requirements of home confinement but was taken into custody nevertheless, Davis said. “He stands willing to sign the entire document if that’s what it takes” to be released.

Cohen was being held late Thursday at the Metropolitan Correction Center in Manhattan, Levine said. His legal team, meanwhile, was preparing an emergency appeal to spring him from custody.

Cohen, who pleaded guilty to tax evasion, campaign finance fraud and lying to Congress, had been released May 21 on furlough as part of an attempt to slow the spread of the virus in federal prisons. Cohen, 53, began serving his sentence in May 2019 and had been scheduled to remain in prison until November 2021 but was permitted to serve the remainder of this three-year term at home.

The conditions restricting the publication of his book would only extend through the end of his term.

Cohen was once one of Trump’s closest advisers but became a loud critic after pleading guilty.

Cohen’s convictions were related to crimes including dodging taxes on $ 4 million in income from his taxi business, lying during congressional testimony about the timing of discussions around an abandoned plan to build a Trump Tower in Russia, and orchestrating payments to two women to keep them from talking publicly about alleged affairs with Trump. Prosecutors said the payments amounted to illegal campaign contributions. Trump, who denied the affairs, said any payments were a personal matter.

Roger Adler, one of Cohen’s attorneys, told the AP that the FBI had agreed to return to Cohen two smartphones it seized as part of its investigation, adding Cohen had planned to pick them up Thursday after an appointment at the federal courthouse in Manhattan concerning his home confinement.

Davis added the appointment with federal authorities was intended to finalize the conditions of Cohen’s home confinement. Cohen also had been expected to receive an ankle bracelet, he said.

“It was nothing other than routine,” Davis said, adding the appointment with his probation officers had nothing to do with him being photographed dining out. Days before Cohen’s return to prison, the New York Post had published photos of Cohen and his wife enjoying an outdoor meal with friends at a restaurant near his Manhattan home.

“It’s not a crime to eat out and support local businesses,” Adler said, adding Cohen had been “thrown back into a petri dish of coronavirus.”

A federal judge had denied Cohen’s attempt for an early release to home confinement after serving 10 months in prison and said in a May ruling that it “appears to be just another effort to inject himself into the news cycle.” But the Bureau of Prisons can move prisoners to home confinement without a judicial order.

Prison advocates and congressional leaders had pressed the Justice Department to release at-risk inmates, arguing that the public health guidance to stay 6 feet (2 meters) away from other people is nearly impossible behind bars.

Attorney General William Barr ordered the Bureau of Prisons to increase the use of home confinement and expedite the release of eligible high-risk inmates, beginning at three prisons identified as coronavirus hot spots. Otisville, where Cohen was housed, was not one of those facilities.