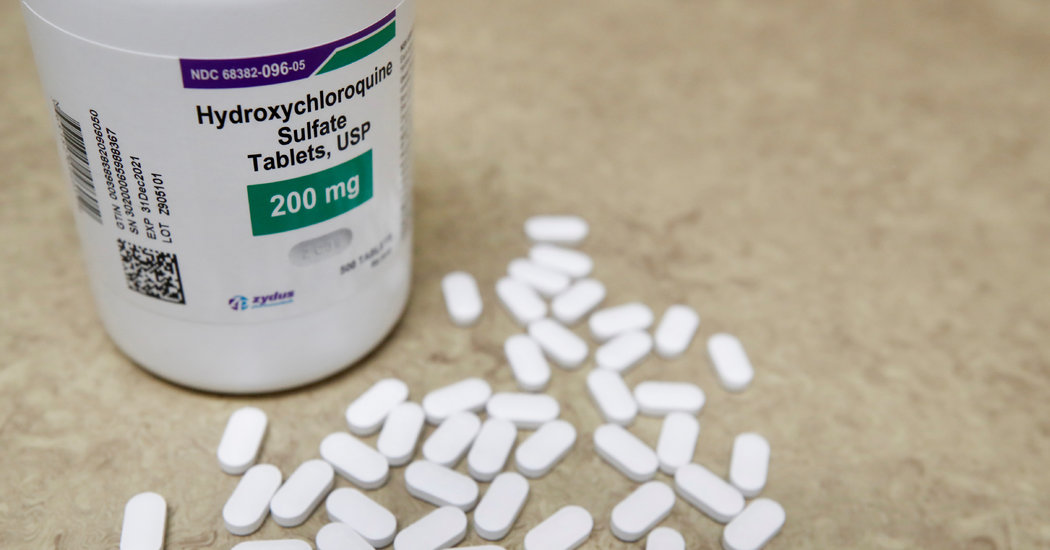 The National Institutes of Health said Saturday that it had stopped two clinical trials of hydroxychloroquine, the malaria drug that President Trump promoted to treat and prevent the coronavirus, one because the drug was unlikely to be effective and the other because not enough patients signed up to participate.

The agency halted a trial that had aimed to enroll more than 500 patients after an independent oversight board determined that the drug did not appear to benefit hospitalized patients. The same day, the N.I.H. said it had closed another trial — of hydroxychloroquine and the antibiotic azithromycin — because only about 20 patients had enrolled in the planned study of 2,000 people.

The two trials the N.I.H. shut down represent the latest evidence that hydroxychloroquine has not lived up to its early promise of fighting the coronavirus.

The N.I.H. said Saturday that an independent oversight board that monitors safety met late Friday to discuss the 500-patient trial and “determined that while there was no harm, the study drug was very unlikely to be beneficial to hospitalized patients with Covid-19,” the disease caused by the virus.

“In effect, the drug didn’t work,” said Dr. William Schaffner, a professor of infectious diseases at Vanderbilt University Medical Center who was not involved in the research. “I think we can put this drug aside and now devote our attention to other potential treatments.”

Mr. Trump had called the drug a “game changer” and took it himself in hopes of protecting himself from infection with the coronavirus. Drugmakers donated millions of doses to the federal stockpile, which distributed them to hospitals around the country, where doctors with few other options administered the drug to severely ill patients.

On Monday, the Food and Drug Administration revoked the emergency authorization it had granted to hospitals to give hydroxychloroquine and a related drug, chloroquine, to patients. The agency said that the drugs were unlikely to be effective and could carry potential risks.

While the N.I.H. said it did not identify safety concerns as part of its review of the 500-patient trial, others have concluded that hydroxychloroquine carries potential risks. This spring, the F.D.A. issued a warning that the drugs could cause dangerous heart arrhythmias in Covid-19 patients.

The planned trial, which was being run by the National Heart, Lung, and Blood Institute, a division of the N.I.H., had enrolled more than 470 patients when the study was stopped. The study sought to learn whether the drug benefited hospitalized patients and those who visited the emergency room, as well as people who were likely to be admitted to the hospital. It was one of several placebo-controlled studies that had been organized to test the drug after a series of small, poorly controlled trials showed early signs of a benefit.

The other trial that was halted, involving hydroxychloroquine and azithromycin, was testing whether the drugs, given together earlier in the disease, could prevent hospitalization and death from Covid-19. That study, led by the National Institute of Allergy and Infectious Diseases, an arm of the N.I.H., “sought to fill this knowledge gap by testing it in a randomized, placebo-controlled trial — considered the gold standard for determining whether an intervention can benefit patients,” the agency said in a statement.

The agency said it did not find any safety problems, but concluded that the recent decision by the F.D.A. to revoke its emergency authorization of hydroxychloroquine “could further dampen enthusiasm for enrollment in studies evaluating these drugs.”

Read More:  Can intermittent fast on any diet

Several other large trials of hydroxychloroquine have been stopped or have not shown the drug to be effective.

“No surprise,” said Dr. David R. Boulware, an infectious disease specialist at the University of Minnesota, who is studying hydroxychloroquine as a preventive and an early treatment against the coronavirus. He said the evidence is increasingly clear that the drug does not work in hospitalized patients. “Whether there is any benefit for pre-exposure prophylaxis or early treatment is as yet unknown, but the role of hydroxychloroquine — if any — appears increasingly doubtful.”

On Wednesday, the World Health Organization said it was stopping the hydroxychloroquine arm of a large clinical trial that is testing several treatments against the virus because evidence — including results from a large study in the United Kingdom — showed it did not reduce mortality rates of hospitalized patients.

And on Friday, the Swiss drugmaker Novartis said it was halting its clinical trial because it could not recruit enough patients to sign up. Only a handful enrolled even though the company had planned for a study involving 440 people.

Other researchers are still studying whether hydroxychloroquine could be used earlier in the course of the illness, or to prevent people from getting infected from the virus. While some of those studies are still underway, one such trial — led by Dr. Boulware — concluded earlier this month that hydroxychloroquine was not effective in preventing infections after someone had been exposed.

That trial included 821 people and looked at whether those who were exposed to the virus, such as health care workers or family members of people who had been infected, were less or more likely to be infected themselves if they were given the drug. It found that there was not a meaningful difference.