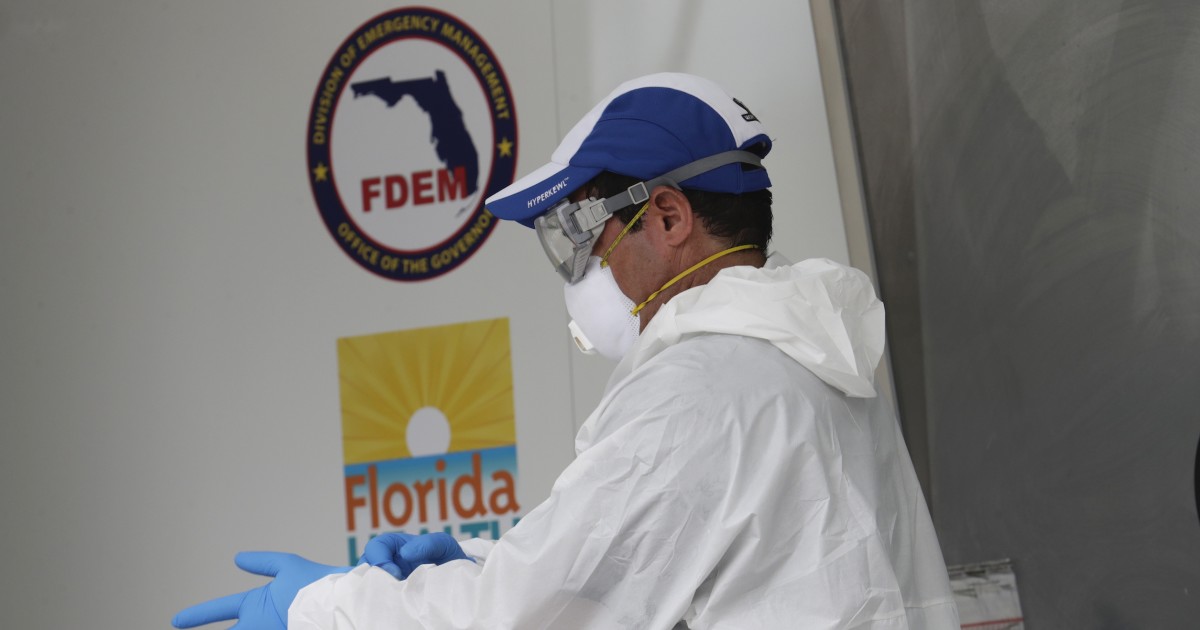 Miami-Dade County, which accounts for nearly a quarter of Florida’s more than 327,000 cases, has become the epicenter of the coronavirus.

In Miami-Dade County alone, nearly 78,000 coronavirus cases have been reported, and about 1,270 people have died. The county is averaging about 2,500 new cases per day. Indeed, the state health department reported more than 2,400 new cases and 24 new deaths on Friday.

Mask-wearing is mandatory in Miami-Dade County, and it adopted an ordinance this week, allowing police and code enforcement officers to issue $ 100 citations to those who don’t abide by the mandate.

The county’s coronavirus report published Friday shows the number of patients admitted with COVID-19 at nearly 120% of ICU capacity, but county Mayor Carlos Gimenez said during a Friday press conference that hospitals still have plenty of space for patients.

“Hospitals have the ability to add hundreds of ICU beds simply by A, not having elective surgery that means you can convert all the recovery rooms into basically ICU rooms,” Gimenez said.

Gimenez said new hospital admissions have remained relatively steady, with about a 2% daily increase over the past four days. He suggested that Miami may have reached the peak number of new daily cases and hospitalizations are unlikely to spike. However, test positivity trends suggest that hospital admissions are likely to jump.

Florida Gov. Ron DeSantis has said he supports Gimenez’s decision to mandate masks in Miami-Dade County, but he has resisted pressure to enact a similar statewide mandate amid record-breaking case increases in Florida.

The United States surpassed records for new daily COVID-19 cases, having reported more than 70,000 new cases Thursday. Record new fatalities were also reported in Florida, Texas, and South Carolina. In total, the U.S. has confirmed more than 3.6 million coronavirus infections and about 138,800 deaths.

Georgia Gov. Brian Kemp said Friday that he would not mandate mask-wearing despite reports from the White House Coronavirus Task Force to governors outlining ways that states could mitigate further spread of the coronavirus, including mandating masks. Kemp is also working to prevent cities and counties from issuing their own mandates, having filed suit against Atlanta Mayor Keisha Lance Bottoms over the city’s mask mandate, alleging that her order violates his emergency orders.

“Now I know that many well-intentioned and well-informed Georgians want a mask mandate, and while we all agree that wearing a mask is effective, I’m confident that Georgians don’t need a mandate to do the right thing,” Kemp said Friday.

A majority of California schools will reopen virtually for the fall school year, Gov. Gavin Newsom announced Friday. California’s two largest school districts in San Diego and hardest-hit Los Angeles County had already abandoned plans earlier this week to resume in-person classes next month. For counties in which schools can reopen for in-person learning, all teachers and staff and some 6 million students will be required to wear masks.

Coronavirus cases in California increased 8,544 on Thursday, pushing the statewide total to 356,178 cases. The total number of deaths increased by 118, making a total of 7,345 fatalities.

The public’s view of President Trump’s handling of the coronavirus pandemic has fallen further, hitting a new low at 38%, according to new Washington Post/ABC News polling published Friday. Trump’s approval rating fell from 46% in May and 51% in March. As the pandemic worsens, having hit records for new daily case increases more than once in June and July, more than half of the public, 60%, disapprove, up from 53% in May and 45% in March. About 52% of the public “strongly” disapproves of Trump’s handling of the outbreak, roughly double the percentage who say they strongly approve of his efforts.

“I just think the people want to hear from the president of the United States,” she told reporters.

The White House blocked the Centers for Disease Control and Prevention from testifying before the House Committee on Education and Labor next week about safely reopening schools.

“School reopening plans must be guided by the advice of public health experts,” Chairman Bobby Scott, a Virginia Democrat, said Friday. “This lack of transparency does a great disservice to the many communities across the country facing difficult decisions about reopening schools this fall.”