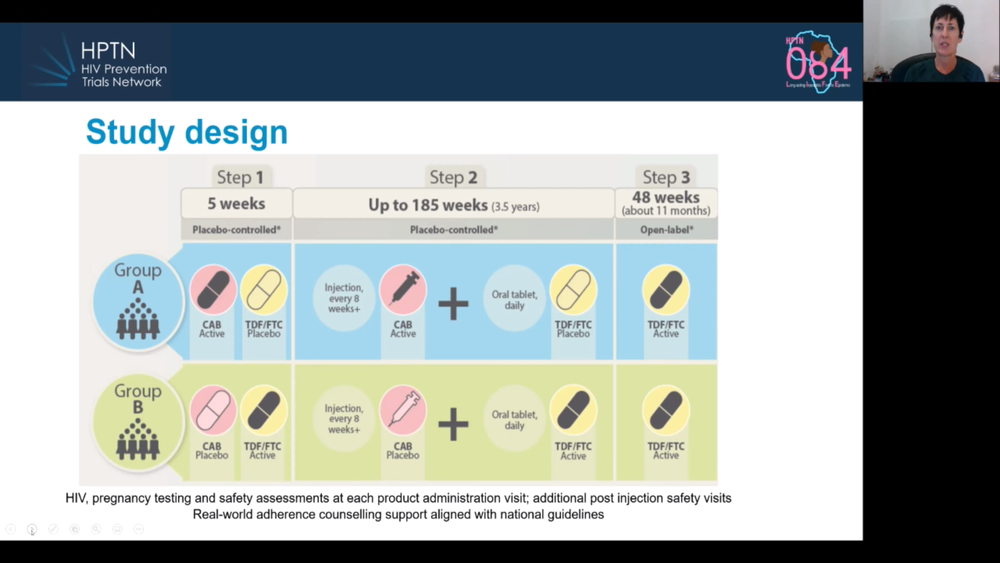 As conference co-chair Professor Sheena McCormack commented, the results are a triumph for injectable cabotegravir, but a sobering result for oral PrEP in African women. Numerous studies have demonstrated the high efficacy of oral PrEP when it is taken as prescribed, but adherence to daily pills was suboptimal and declined over the course of the study.

How did Dr Delany-Moretlwe explain the superiority of the injections over the pills? “I think we’ve heard from women for many years that they want HIV prevention methods that are discreet and can fit into their lives,” she said. While many women have embraced oral PrEP, others face social barriers. Many find that in overcrowded accommodation, it is hard to keep medication bottles out of sight of partners and family members, who may suspect that the pills are for HIV treatment or have concerns about the woman taking control of her own sexual health.

Refers to the mouth, for example a medicine taken by mouth.

A pill or liquid which looks and tastes exactly like a real drug, but contains no active substance.

A drug-resistant HIV strain is one which is less susceptible to the effects of one or more anti-HIV drugs because of an accumulation of HIV mutations in its genotype. Resistance can be the result of a poor adherence to treatment or of transmission of an already resistant virus.

A class of antiretroviral drugs. Integrase strand transfer inhibitors (INSTIs) block integrase, which is an HIV enzyme that the virus uses to insert its genetic material into a cell that it has infected. Blocking integrase prevents HIV from replicating.

A device that is worn inside the vagina for a month at a time, which women can insert and remove themselves. A vaginal ring for HIV prevention that slowly releases the antiretroviral drug dapivirine is being developed.

“Injections offer a real alternative and fit in with women’s already existing sexual and reproductive health practices,” she continued. More than half the study participants were already using injectable contraception.

The aim was not to displace oral PrEP but to give women more choices. Dr Delaney-Moretlwe continued: “We now have another preventive option for women and the more options we have, the more likely it is that people will find methods that will suit them over their life course.”

Today’s presentation on the HPTN 084 study confirmed the results announced when the trial was stopped early in November (see our report here), but added a few details. To briefly summarise, 3224 cisgender women were randomly allocated to receive injectable PrEP (every eight weeks) or oral PrEP (every day). The study used a ‘double-dummy’ design, meaning that half the participants got active injectable cabotegravir and inactive placebo pills; the other half got inactive placebo injections and active tenofovir/emtricitabine pills.

In the absence of these prevention options in the study communities, HIV incidence is approximately 3.5% a year. In the study’s oral PrEP arm, it was 1.9%, and in the injectable PrEP arm, 0.2%.

The researchers believe that poorer adherence to the pills likely explains these results. At week 4, only 60% of women in the oral PrEP arm had blood levels of tenofovir that were consistent with daily dosing, and this declined to 34% by week 57. In contrast, women attended 93% of their injection visits, a figure that only declined slightly over time.

In terms of side-effects, there were more injection site reactions in women receiving the active injections (32%) than in those receiving placebo injections (9%), but these were mostly minor and did not lead to anyone withdrawing from the study. There were more reports of nausea in the active oral PrEP arm (9% vs 5%). Given that cabotegravir is an integrase inhibitor, the researchers monitored weight gain. Women in both arms put on an average of 2.3kg per year, with no difference between arms.

Delany-Moretlwe signalled two important simplifications to the way in which injectable cabotegravir is likely to be implemented. In the study, women took cabotegravir pills (or placebo pills) for five weeks before starting the injections. The rationale was to ensure that cabotegravir is well tolerated, since the injectable cannot be removed from the body if it causes problems. However, the evidence from this and other studies is that such side effects are rare, so the oral ‘lead in’ may not be necessary.

The other suggested simplification concerns the ‘long tail’. This refers to the persistence of low levels of cabotegravir in the body for many months after a person’s last injection. The individual will be vulnerable to HIV unless they start or continue another method of HIV prevention, such as oral PrEP. In addition, the ‘long tail’ means that there is a lengthy period during which, if they caught HIV, they could develop drug resistance. Drug resistance only arises in situations like this when there is some drug in the body but not enough to fully suppress an infection.

To deal with this concern, study participants who stopped receiving injectable cabotegravir were offered a year-long course of oral PrEP. There are questions about how practicable this will be in real world settings.

Delany-Moretlwe argued that the key thing for healthcare providers to do will be to understand the reason why the person is discontinuing. If they want to stop because they no longer feel at risk of HIV infection, then they may not acquire HIV or develop drug resistance. If the injections are not right for them, then the provider should explore alternative HIV prevention options with them.

However, there was some pushback from conference delegates on this point. Stopping will not always be a conscious choice and many people will simply be lost to follow up. An increasing prevalence of strains of HIV that are resistant to cabotegravir would be a risk to HIV treatment programmes that are now based on dolutegravir (a drug from the same class).

Nonetheless, the general mood is of excitement about the increasing range of HIV prevention options, including oral tenofovir/emtricitabine, the dapivirine vaginal ring (recommended in World Health Organization guidelines, as of this week) and injectable cabotegravir. The injection will be submitted for approval by the US Food and Drug Administration later this year and then to other regulatory agencies.