Pubs are only dangerous to people already at risk of Covid and airplanes are ‘safe’ because they have the same standard of ventilation as an operating theatre, expert says

Pubs are only dangerous for people already at risk of Covid and airplanes are ‘safe’ because they have air conditioning almost as good as operating theatres, an expert has said.

Professor Robert Dingwall, one of Britain’s leading sociologists, told a webinar today there was only a ‘small’ risk of catching the virus in a pub and then being hospitalised.

But he said this was ‘heavily age-loaded’ and focused on ‘specific groups where one can think about specific advice on protection’.

And, sparking hopes of holidays this summer, Professor Dingwall added planes are ‘fundamentally safe environments’ because of their excellent ventilation systems.

Mountains of research has shown Britons who are over 65 or obese are more at risk of being hospitalised and sadly dying if they catch the virus.

Self-accommodated holiday lets will also be allowed to raise the shutters on this date, but it is still unclear whether holidays overseas will be permitted this year. 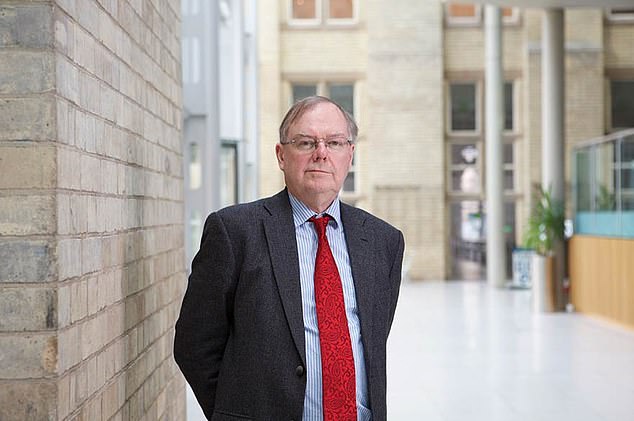 Professor Robert Dingwall, one of Britain’s leading sociologists, said the risk was ‘small’ in pubs from the virus and ‘heavily age loaded’. He added it was also focused on ‘specific groups where one can think about specific advice on protection’ 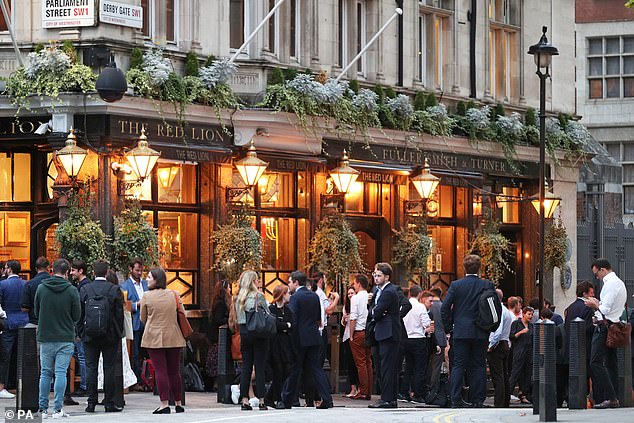 Boris Johnson’s roadmap out of lockdown will see pubs (such as this one in Westminster, London) reopen their outdoor areas on April 12 at the earliest

40 PER CENT OF VACCINATED OVER-80s HAVE BROKEN LOCKDOWN

Two in five over-80s have broken lockdown rules by meeting up with others indoors after getting vaccinated against Covid, figures suggest.

Office for National Statistics polling data revealed 43 per cent of the elderly have flouted virus-controlling restrictions after having a jab.

Nearly half admitted to meeting friends or family indoors after receiving both doses of the vaccine, even though this is still not allowed.

Under rules introduced in England in January, family or friends cannot meet socially indoors unless they are in the same household or support bubble.

Separate households will not be allowed to meet inside in groups until May 17 at the earliest in England, according to Boris Johnson’s roadmap out of lockdown.

Professor Dingwall, from Nottingham Trent University, made the comments while addressing a Royal Society of Medicine webinar on the virus entitled ‘Covid-19 series: Pandemic sociology and why it matters’.

Pubs were forced to take extensive measures to prevent the spread of the virus on their premises last year.

This included serving customers at their tables only, and only allowing people to drink if they were ordering a ‘substantial meal’.

Plastic screens were also installed between tables at some public houses while others distanced their tables by two metres.

But ministers still closed the establishments when they imposed a third lockdown in January amid spiralling Covid hospitalisations and deaths.

Professor Dingwall said the virus-controlling measures taken in pubs had all helped to limit the spread of the disease on their premises.

Airlines were also asked to take additional precautions, including ensuring all passengers wore face masks for the duration of the flight and asking them to fill in arrival forms when they returned to the UK.

They were also socially distanced on some flights with empty seats left between passengers from different households.

Previous research by the US Department of Defence also suggests air conditioning systems on planes remove particles that could transmit viruses from the air.

In their study published in October a dummy ‘coughed’ florescent particles on a plane which were monitored by researchers to see how they spread.

They concluded the droplets were quickly sucked up by the aircraft’s ventilation system and were unlikely to contaminate nearby surfaces or blow into the breathing zones of others sitting nearby.

Professor Dingwall compared them to air conditioning systems in theatres, which have sophisticated systems to circulate air and control temperatures for their audiences. 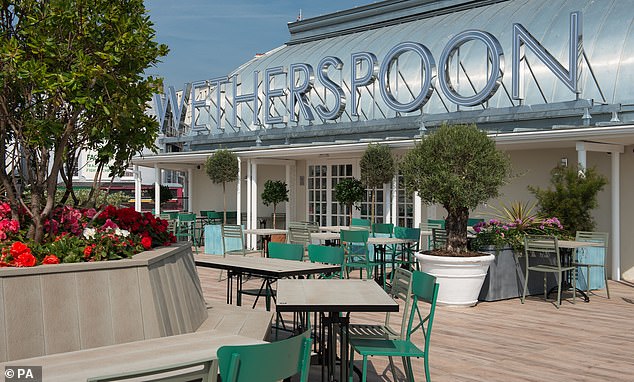 Wetherspoon’s pub – the Royal Victoria Pavilion in Ramsgate – which measuring nearly 11,000 square feet and has an enormous beer garden

It comes after Wetherspoons says it will open its gardens and rooftop areas at nearly 400 pubs to drinkers from April 12.

The pubs will be open from 9am to 9pm from Sunday to Thursday and 9am to 10pm on Fridays and Saturdays, although some will have restrictions on closing times.

They will offer a slightly reduced menu, with food available from 9am to 8pm seven days a week.

Others will also be allowed to start offering food and drink to punters sitting outdoors from April 12, although it will be table service only.